A telecommunication and digital transformation expert in a challenging new role...

Amir Abdelazim is no stranger to transformation and change. The new Chief Technology and Information Officer at leading Iraqi telecom operator Asiacell can look back on a career spent throwing himself at one monumental challenge after another.

Born in Egypt, Abdelazim graduated from the faculty of engineering at Alexandria University with a degree in communications in 2003. Shortly after, he began working as a telecom engineer for the ANRPC before taking a job with Equant - which later became Orange Business Services. “It was my first contact with the ICT sector,” he recalls.

Late in 2004, Abdelazim took a job with Alcatel-Lucent that threw him headfirst into a pivotal moment in the history of the Egyptian telecom sector. “It was a very interesting time,” he says. “Egypt was taking a big leap forward in terms of telecom coverage, so there was a built up of this centre of competence in Cairo and I was part of that team, which was a very good introduction to mobile communications technology.”

His work for Alcatel-Lucent saw him being a part of projects with upstart telecom brands across Africa, first with Orange Egypt, then with other operators in Algeria, Togo and the Invory Coast. “Then I got to be a part of my first green-field operation, which was with Globacom Nigeria. Being part of the team that started the operation there was a big part of my journey with Alcatel-Lucent, starting out my career on the rough side of the business in a very challenging market,” Abdelazim remembers. He and the team rose to the challenge, building Globacom Nigeria’s subscriber base from 1mn people to the leading position the company currently holds in the Nigerian market.

Abdelazim remembers the challenges of the assignment, but also that he had been thoroughly bitten by the greenfield bug. “After that, I took another chance on another green-field operation working for Etisalat in Egypt. It was another interesting journey. We took that company from the point of getting its license to operate, over the course of four years, to being a real competitor in the market,” he says.

“It was a challenging time. Customers were not easily satisfied and there were already two large competitors in that market.” Nevertheless, the project was a success and Abdelazim received several rewards, from Etisalat and the Egyptian government for the quality of service in the region he oversaw.

“After that, I decided to get a technology refresher and moved to Nokia,” he says, recalling the role which saw him work on large scale network optimisation and planning projects across Africa and the Middle East. In 2013, he moved to another Swedish company, Millicom, which acts as the umbrella corporation for a number of telecom brands in Africa and Latin America, including Tigo.

“I was brought there to deal with a shortage of quality, bring customer experience into the heart of the operation and improve the experience for everyone,” explains Abdelazim. “The African market is a challenging one. In a lot of ways, digital transformation in Africa isn't an evolution; it's a problem-solving activity.” Abdelazim and his team took on the task of improving Tigo’s network quality in Tanzania. Their efforts were a success, earning them an award for the most improved network in Africa, and their methods were used as a blueprint for the pivoting of Tigo and Millicom’s network strategies. “It was an interesting journey that's helped polish my understanding of how to monetise customer experience, which has become my passion,” he recalls.

Abdelazim’s time at Millicom came to an end in 2018, after overseeing a complex and large-scale merger between TigoGhana and Airtel. "It was quite a surgical activity,” he remembers. “We thought of it as two airplanes flying beside one another and you move passengers from one flight to another without disturbing them. It needed to be simple and painless for the customer. It was painful for us, but not for the customer," he laughs.

Abdemazim grins. “Then, I decided to give myself a break. I wanted to take a year off to spend some time to myself and start my own business.” He founded his own firm, Qualitec, in December of 2018 and freely admits that the business’ success completely derailed his attempts at taking a holiday. “During that time, Asiacell, as part of Ooredoo, approached me and we began our journey together,” he explains. 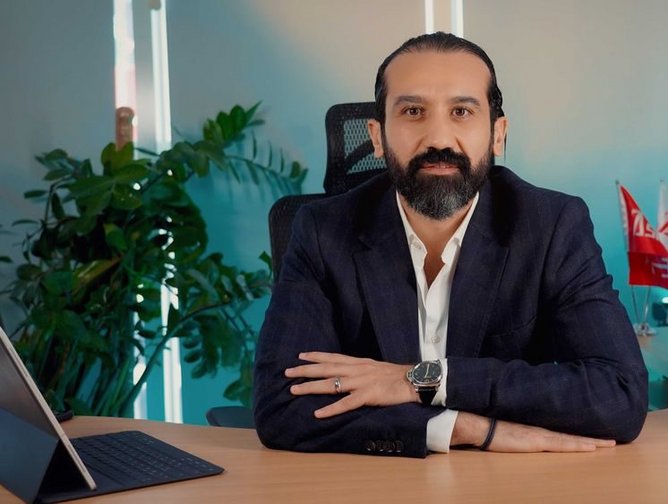