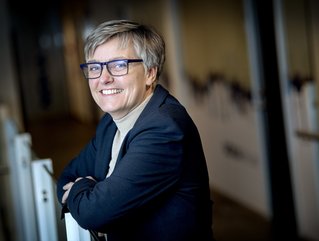 Jane Rygaard, Head of Dedicated Wireless Networks & Edge Clouds, discusses the role of diversity in making technology for the masses

With the advent of sweeping digital infrastructure upgrades, programs granting access to technology and the necessary education to leverage that access into jobs and the ability to use more digital services, it could be forgivable to consider the issue of the digital divide moot - at least in developed economies.

The issue of people - especially those belonging to more marginalised groups, including people of colour, economic migrants, refugees, the elderly, financially disadvantaged, and women, not to mention more isolated rural communities made increasingly reliant on internet access over the past two years - lacking access to the digital age, however, is far from closed.

In California, as public schools entered their second year of partial or fully remote learning, a study conducted by the U.S. Census Bureau found that, while access to stable internet had improved across the board since the first wave of lockdowns in 2020, African American and Hispanic households were still 1.3 to 1.4 times as likely as white households to experience limited accessibility.

In the UK, during the first half of 2020, 93% of rural residents increased their use of online services they already used before the pandemic, while over half started using some online services for the first time, for clothing and food shopping. This swelling appetite for online services - while no bad thing in of itself - “will have significant consequences for those rural residents facing digital exclusion due to lack of online skills and connectivity,” commented Brian Wilson, chairman of Rural England CIC, when I reached out to him for comment on his organisation’s latest report. “For all the excitement about next generation gigabit broadband and 5G mobile, there are many rural homes and businesses in places which cannot yet obtain a last generation connection… The other increasingly urgent need is to give everyone the opportunity to acquire basic digital skills, to ensure that residents - rural or otherwise - do not face digital exclusion.”

The key to bridging the digital divide, then, lies at an intersection of providing education, exposure, and access to the digital world. However, the fact that some demographics are significantly more likely to be left on the “wrong” side of this widening gulf than others is also an expression of the lack of diversity in the industry that makes the technologies underpinning the digital world.

A Diversity of Perspectives

“Of course, one thing driving the digital divide is simply where and to whom technology and connectivity are available. If you don't have access to a technology, it's obviously very difficult to learn how to use it,” says Jane Rygaard Pedersen, Nokia’s Head of Dedicated Wireless Networks & Edge Clouds, a longtime advocate for running contrary the tech industry’s all-too-common fixation on what she describes as “the rabbit hole of technology for technology’s sake.”

For Rygaard, lack of clear focus on the end good that a technology provides, is just one of the contributing factors creating a world where technology runs the risk of reinforcing existing inequalities - serving the people who look like the people who made it better than it serves everyone else.

“Even if a technology is available, who can and can't adopt it is also affected by how that technology addresses its users. Is the technology made for the people, or do some people need to adapt to the technology?,” she asks. “There's an example involving the statistics surrounding car crashes. Globally, the demographic that's most likely to be involved in and injured by a car crash is an Asian woman. Now, that's a statistic that gets tied up in a number of very prejudiced views, but when you look a little closer - at who's developing cars and the safety equipment within them - you see that virtually all cars and their safety equipment are made to the same standard, which is a 180-centimetre tall man.”

I looked into her claim and, while a US Department of Transportation survey found that crashes involving male drivers are more common and are often more severe than those involving female drivers, women are more likely than males to be killed or injured in crashes of equal severity - which supports Rygaard’s next point.

“If you think again why one demographic is more prone to getting hurt in a car crash versus another, it starts to make more sense. Women of Asian descent, for example, tend to have physical characteristics that don't exactly line up very well with those of the 1.8 metre tall white man the car was designed for,” she explains. “Of course the car is going to be more difficult to use, and of course safety equipment won't be as effective if it was designed for someone who's a totally different size and shape.”

It’s the same argument for one reason why the digital divide negatively affects the elderly, people of colour, women, rural communities, and the financially disadvantaged (there are other reasons too). There are very few old, black women living in rural communities making minimum wage designing the next phase of the 5G rollout.

That may be glib, but a lack of diversity at the design phase is a known source of inherent bias in everything from AI algorithms used in police profiling (which, in the US, disproportionately target black and hispanic citizens), to the safety features in a four-door sedan.

“When you make any technology and put it out into the world, it's so important to ask who it fits, who benefits from the way it's made, who doesn't, and how to fix it. It's the same issue with the digital divide,” says Rygaard. “If technology only works for people who look and think like the people who made it - and the people who make the technology all look and think the same way - then things will never change. In order to truly bridge the digital divide, we need more diversity in technology. Whether that means gender or any other factor, if we don't have diversity then we end up making technology for the sake of technology, and not because technology should make our lives better.”