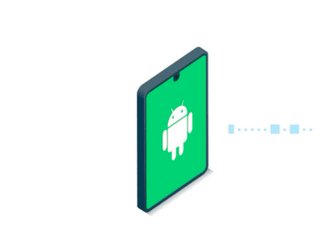 With an emphasis on data privacy, smartphone startup the /e/ Foundation wants to make Android without Google a viable option.

Android is by far the world’s most popular operating system for smartphones. As of May, the operating system held a commanding 72.72% market share of the global smartphone industry, with Apple’s iOS clocking in at just over 26%, and the third place runner up, Samsung, clinging to a measly 0.4%.

The story the numbers tell is a clear one: the entire smartphone industry is wholly within the grip of a software duopoly that even the world’s largest electronics manufacturer (Samsung) and Huawei (which recently launched its own Android competitor, HarmonyOS) seem totally incapable of breaking.

Much of the criticism leveled at Android, a largely open-source operating system that can be found on just about every non-Apple smartphone in the world, is its connection to its parent company, Google, and the subsequent implications for its users’ data privacy.

As smartphones have become an increasingly essential part of our daily lives, the rate at which Google (through both Android and iOS devices) passively collects our data, which is then sold to the highest bidder, has also spiked dramatically.

Research conducted in 2018 by Digital Content Next found that, while you are actively using your Android smartphone, Google passively collects data pertaining to your online and offline activities as much as 90 times an hour - amounting to roughly 11.46MB every single day. iOS users aren’t much better off. Despite Apple’s ongoing rhetoric surrounding privacy, Google manages to collect data from iPhone users as much as 51 times an hour - for a grand total of around 5.7MB per day.

It’s worth noting that Apple does a better job of preventing Google from harvesting user data while their phones are inactive. Google only harvests data 0.7 times per hour when an iPhone is inactive. By contrast, Google helps itself to Android user data as much as 40 times an hour, even when the user’s device is inactive.

“Over the last ten years, mobile phone evolution has made them our daily companions, within reach at all times. But they have also quietly transformed into surveillance devices, sharing our personal data with the highest bidder or with government agencies to predict and influence our actions.” - the /e/ Foundation

Privacy concerned users can obviously opt for a device that’s devoid of Google services through the Android Open Source Project. However, it’s kind of like living in a tent deep within the woods to get off the grid: probably fine for some rugged individuals, but kind of an obstacle to living a normal everyday life, and an experience that most people who rely on everything from Google Calendar to Drive storage would probably find deeply unpleasant. And then there’s the fact that - at least according to Jordan Palmer, a journalist over at Tom’s Guide - “even in the open source version of Android, there are still remnants of Google’s influence.”

This brings us to the /e/ Foundation, an open source coding organisation that wants to de-Google your smartphone. Dedicated to building “mobile operating systems, apps and code that put users’ privacy first before profit,” the /e/ Foundation claims to be able to deliver a fully de-Googled experience, from operating system to applications which, “Combined with online services, such as a search engine, email, storage and other online tools, it creates a unique environment privacy-in privacy-out.”

Everything(aAnd I mean everything) Google has been liposuctioned out of the /e/OS, including some really foundational behind-the-scenes stuff which means that the OS uses different Network Time Protocol and DNS servers. In the place of anything and everything remotely Google, third party solutions from Mozilla, microG, and several other sources. It’s all as open-sourced as possible.

The foundation has been getting some real attention recently - particularly as consumers have become more conscious about the degree to which corporations have eroded individual data privacy over the past decade. In March, it was reported that /e/ has plans to start selling pre-loaded phones (refurbished Samsung Galaxy S9’s to be specific - as well as the Fairphone 3 and 3+) set up to use /e/OS right out of the box in the US market. So far, /e/'s operations have been wholly confined to the European market.

Now, /e/ is a non-profit foundation that’s spent the past few years releasing things for free (or as cheaply as possible), so they’re definitely not a startup in the traditional sense. However, as their operating system has matured, and a groundswell of consumer and media attention has grown around them, I sincerely hope we see the /e/ Foundation take a greater and greater role in both ensuring individual data privacy in the smartphone age, and presenting consumers with a viable alternative to the smartphone OS duopoly.