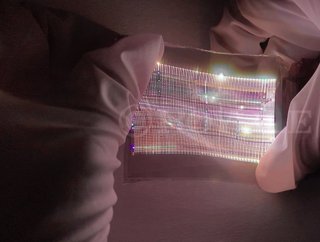 Royole, the company that made the first folding phone is back and taking display tech further than ever with the first “stretchy” micro-LED display.

Royole, the company behind the FlexPai (the world’s first folding smartphone) is back with another world first. On Monday, the relatively obscure Chinese tech firm unveiled the world’s first micro-LED based stretchable display.

The FlexPai: a flawed endeavour of dubious intent

The world’s first foldable smartphone was supposed to be a Samsung or a Huawei. Both handset heavyweights (Huawei was still near the top of its game all the way back in - yikes - the Summer of 2019, remember?) made a great deal of fanfare about their upcoming releases, promising “the summer of the foldable phone.”

Things didn't exactly work out that way. Samsung’s first batch of review phones fell (quite literally) to pieces in the hands of some very prominent reviewers, and Huawei’s relatively new position as the object of the Trump Administration’s nationalist ire royally screwed up its supply chain. Both firms pushed back their releases until September. Hot foldable Summer was canceled… for about five minutes.

Royole, which is based in Shenzhen, announced (to just about everyone’s surprise) that it would be launching its own folding smartphone nine months ahead of the competition. And so it was that the FlexPai was commercially released in January of 2019 to… well, thorough critical panning. The Verge called it “charmingly awful”, and the South China Morning Post’s tech review column bemoaned the quality of the camera and lack of Google applications. It was, in short, a very, very small first step for foldable phone kind. With a form factor like the love child of a tablet and a taco, the FlexPai was quickly cast aside by the global smartphone community for the rather transparent publicity stunt that it very likely was.

However, poor choice of go-to-market date and strategy aside, you shouldn’t confuse Royole for a bunch of hacks fighting for the limelight. If you want to know what that would look like, look no further than the eminently funny Escobar Fold (yeah, that Escobar. Well, his brother actually, who started reselling Samsung Galaxies with gold stickers on them at prices which really were too good to be true).

Royole had spent several years working on flexible display tech prior to launching the FlexPai, a device which really smacked of being released before being completely ready for the market. If you want some evidence that they actually know what they’re doing, look at the FlexPai 2, launched in December of 2020 and, by all accounts, a really good phone - folding or otherwise.

Flexing on the competition

Royole is a flexible display company first and a smartphone-maker second. The firm has partnerships in place with some huge brands, from Louis Vuitton to Toyota, to make flexible displays and sensor tech.

It’s unlikely that the company’s latest development will result in a “stretchy” smartphone, but honestly, Royole’s latest announcement and wide ranging list of partners actually makes it pretty hard to predict where its new stretchy screens will pop up.

Presented this week at the 2021 Society for Information Display, Display Week Symposium, Royole’s new prototype is “not only foldable and rollable, but also capable of 3D free form shaping, including pulling, twisting, convex and concave deformations,” according to company officials, who add:  “Stretchable electronics are the bleeding-edge of flexible technologies, building electronic circuits with stretchability and elasticity.”

Royole is confident that flexible screens that can be stretched, twisted, rolled up and otherwise manipulated like some sort of 1980’s educational toy later recalled for containing high levels of mercury, asbestos and black tar heroin. It is also confident that tech like this could have big implications for the development of new form factors that require elastic qualities across industries like health and fitness, sports, fashion, and smart transportation.

“The development of stretchable display technology compatible with existing industrial manufacturing processes is a signal of the exponential growth the flexible electronics industry is experiencing,” said Dr. Bill Liu, Founder, Chairman and CEO, Royole. “Royole continues to lead in flexible innovation, with stretchable technologies marking the next frontier in technical progress that will enable unprecedented applications and form factors across augmented and virtual reality, wearable electronics, biomedical applications, vehicle design and beyond.”

The breakthrough development was supposedly achieved using micro-LEDs, which benefit from an ultra-low aperture ratio and simple encapsulation that allow them to be “woven” into stretchable pattern designs.

Royole isn’t the only company exploring the potential overlap between electronics and fabric. In March, researchers at the University of Fudan in China unveiled a new smart fabric, made using luminous thread, and capable of both displaying information and receiving inputs.