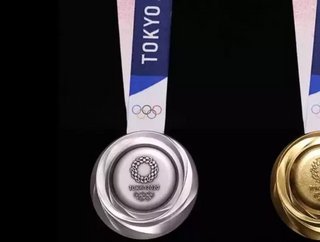 The Olympic medal-making campaign received 47,488 tonnes of smartphones, laptops, and gaming consoles to make the medals, including 5mn phones from NTT

This year’s Olympic Games in Tokyo is rewarding athletes with medals made from recycled electronics. The original idea, announced over four years ago by the Tokyo Olympics organising committee, became a reality when the Olympic medal-making campaign asked members of the public to donate old devices such as smartphones, laptops, and gaming consoles to make the medals.

Launched in 2017, the campaign, called “Making Medals for Urban Mines”, received over 47,488 tonnes of equipment in the first 18 months, and 5mn phones from the local Japanese phone provider, NTT. The campaign planned to make 5,000 Olympic medals from the Olympic and Paralympic Games and reached the targeted amount of bronze within just 14 months.

To support the project, NTT’s donation of 5mn devices came from collecting used mobile phones in approximately 2,400 of its shops across Japan. The company found that in 2017, household ownership of devices was 94.8% of which 75.1% were smartphones.

Having conducted the survey, NTT said in a statement: “Considering that people tend to replace their mobile telephones—essential to daily life as information terminals—just over every four years or so, this world-first project for recycling used mobile telephones and other small appliances 100% to create medals will also lead to the creation of mechanisms for recycling limited resources.”

Kohei Uchimura, a Japanese gold medal-winning gymnast who helped launch the medal-making campaign, said: “Tokyo 2020 Olympic and Paralympic medals will be made out of people’s thoughts and appreciation for avoiding waste. I think there is an important message in this for future generations.”

The Tokyo Olympic Games is the first Olympics and Paralympics to award competitors with medals made from recycled devices with only 30% of the sterling silver used in the medals at the 2016 Olympic Games being made in the same way.

There is no confirmation yet as to whether the next Games, the 2024 event held in Paris will also use recycled materials in the medal-making process.