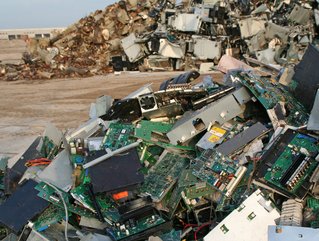 With smartphone sales (and therefore e-waste) on the rise, manufacturers need to start thinking about end of life as just the beginning

Despite a momentary dip in 2020 (for reasons that should be confusing to no one), smartphone sales are on the rise.

In 2013, just shy of 970 million smartphones were sold worldwide. Five years later, that figure comfortably exceeded 1.55 billion. Now, as remote and hybrid work, rapid digitalisation of developing markets, and the increasing maturity of 5G continue to drive sales, we find ourselves facing a decade of ever-increasing smartphone consumption.

Obviously, this poses some serious problems. As smartphone sales have grown worldwide, so too has the industry’s contribution to greenhouse gas emissions, as both the manufacturing process and the hunt for rare earth minerals (many of which the Royal Society of Chemistry predicts we will exhaust within the next century) has accelerated.

This, combined with a convenience culture in which the average smartphone is beating the odds if it doesn’t break down within four years, is creating an unsustainable amount of electronic waste (e-waste).

Electronic waste, or e-waste, is one of the fastest-growing sources of waste and emissions on the planet. While e-waste only represents 2% of America's trash in landfills, it accounts for around 70% of overall toxic waste, thanks to non-degradable minerals, heavy metals, and chemicals used in smartphone batteries.

If the rare earth metals, plastics, and other non-biodegradable - potentially toxic - components of commonly discarded e-waste items were easily recyclable, this wouldn’t be such a massive problem.

“Looking at a $1,000 smartphone, it’s easy to imagine that, at end of life, it will represent a highly valuable source of materials, precious metals and the like – and that converting it back into those raw ingredients would be a cost-effective alternative to mining virgin materials,” says Nathan Wrench, Head of Sustainable Innovation, Cambridge Consultants. The reality, however, is that extracting and recycling valuable components from a smartphone is fundamentally at odds with the way smartphones are designed, manufactured, and sold.

“Just bolting on a 'recycle' stage to the linear product lifecycle of ‘take, make, transport, use, dispose’ makes this extremely challenging,” he continues. In spite of the fact that the UN’s report “conservatively estimated” $57 billion worth of gold, silver, and other high-value, recoverable metals from consumer electronics were “mostly dumped or burned rather than being collected for treatment and reuse” in 2019, Cambridge Consultants’s own research points to the sobering fact that the realisable yield in raw materials of a $1,000 smartphone could be as little as $1.

Recycling smartphones by transitioning from a device worth hundreds or thousands of dollars to a pile of raw materials worth less than the cost of a KitKat clearly hasn’t produced much enthusiasm from smartphone manufacturers or the telecoms sector so far. The fall in value is too precipitous.

The answer, it would seem, is to soften that fall.

If, as Wrench explains, “treating an end of life smartphone as ‘ore’ – grinding it up to powder and then attempting to extract minerals – is a massive destruction of value, and nothing more” then the answer to the e-waste crisis would appear to be a business case, rather than a more efficient ore-extraction technology.

“The maximum recoverable value from used smartphones needs to come from value derived from business models that look more like consumer goods and less like raw material commodity production,” Wrench continues. The answer, he says, “lies in the re-spinning of that original $1000 product, of generating value from its sale and resale several times on its gradual progression down the slope back towards its $1 raw material cost.”

The second life of a smartphone, Wrench contends, “should be as a smartphone – wiped clean of its data, repurposed for a second user.” After that, the next easiest way to extract more value from a smartphone is by remanufacturing it, replacing one or more degraded components but keeping the overall device intact. It’s worth noting that this approach becomes a lot easier (and can even be ingrained at the consumer level) by embracing greater modularity in the way devices are built. Several startups, like Fairphone in the Netherlands, are already pushing the boundaries of the modular smartphone as a way to prolong end of life, but the practice has yet to enter the mainstream, where two years still remains a good run and upgrade cycles are still ruthlessly pushed at the expense of support for older models.

“Thirdly – the exquisite complexity that can turn cents-worth of silicon and copper into dollars-worth of functioning modules – cameras, displays, comms modules – should be reused as modules in second-life electronics goods,” adds Wrench. “These might be home security products, appliances or toys – or in applications where the business case might be marginal with brand new first-generation components.”

This is where the idea of the circular economy comes into play - the philosophical shift away from single-use, single-owner smartphones and towards a world where “By the time it makes sense to pulverise and turn the product into a sand-like powder, all other opportunities to extract value from the product need to have been exhausted.”

Bringing about this philosophical shift from a disposable to a circular economic model, however, will require concerted effort at all levels of the industry - from manufacturers to governments, consumers, and telecom operators.

O2’s own recycling initiative has already processed around 3.3 million devices, with close to 95% of them being refurbished and re-used – extending the life of devices and supporting the circular economy.  Some of those devices are sold back to new consumers, and some are donated to those in need through organisations like Hubbub. Rather than sent to the landfill (the UN’s report suggests that just 17% of all discarded electronics in 2019 even made it to a recycling plant), functional smartphones are redistributed back into circulation.

The infrastructure to grow the circular economy exists. “From the point of view of the electronics industry, the biggest shift needed is a philosophical one,” says Wrench. “Each brand needs to think beyond its first customer and to consider the circular principles that follow the product through multiple hands.” A brand can add the most value and derive the biggest return “by taking responsibility for its own products at end of life – by making that point the middle of life.”