Following a series of leaks, we have a good idea of the specifications behind Samsung's new Note range...

Thanks to a leak on Samsung’s Russian site, we just got a very good look at one of Samsung’s flagship products for 2020: the Galaxy Note 20 Ultra. It’s quite possibly the best-looking Samsung phone yet, and some of the new technology rumoured to be inside it makes it a strong contender with the upcoming iPhone 12.

Samsung’s new models for the year typically get revealed in early August. While there was some speculation that the ongoing COVID-19 pandemic would knock those plans off their axis, it seems as though the South Korean tech giant is going ahead on schedule. Whether these announcements will translate into timely release schedules of the physical devices remains to be seen.

In the meantime, thanks to an image accidentally uploaded to the product page for the Galaxy Note 8, we have a good idea of what the new Mystic Bronze finish on the Note 20 Ultra will look like. The Galaxy Note 20 Ultra is also expected to come in Black, Grey, Silver and White. 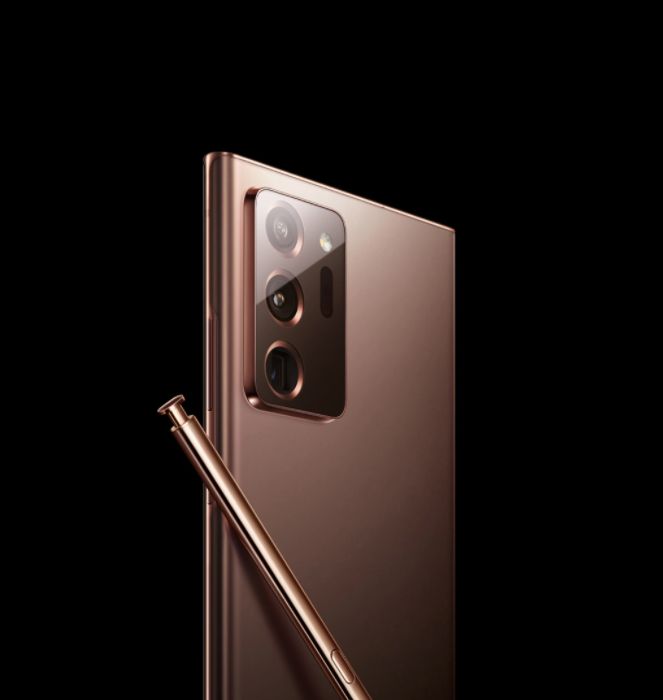 Most strikingly, the new Note 20 has had its camera bank reworked. The large camera slab on the Galaxy s20 Ultra has been replaced by a sleeker, cleaner design which also appears to integrate a focus sensor. This can be expected to provide some significant benefits, since the Note 20 Ultra is reported to have the same super high resolution camera (108 megapixels) as the S20 Ultra, which reportedly suffered from focusing issues. Hopefully, this new focus sensor should solve them.

The new Note 20 Ultra is also supposed to boast faster storage, superior RAM, a larger battery capacity, support for 45W charging and next-generation biometric security, according to a Forbes article bringing together several other external sources. According to Ross Young, CEO of Display Supply Chain Consultants, the Galaxy Note 20 Ultra and Note 20+ will feature “LTPO” (Low-Temperature Polycrystalline Oxide) backplane technology, which will be used with newer OLED panels. Although this new screen technology won’t be present in the base model, the iterations with higher price tags can expect to benefit significantly from the new wave of smartphone displays.

LTPO technology is a new development from Apple, which uses a mixture of low-temperature polycrystalline silicon (LTPS) thin-film-transistors (TFTs) and Oxide TFTs to achieve ultra-high resolution display output, while draining less battery than traditional OLED and LCD displays. The first industry example of LTPO tech was the Series 4 Apple Watch. According to industry experts at PC World, “having an LTPO display is good because it lets Apple dynamically change the refresh rate on the wearable's screen. If you're looking at and interacting with it, they crank it up. If it's idle, they only really need to refresh it once a minute or so.”

According to Samsung tipster Ice Universe, the new line of Samsung phones is on track for an August 5th reveal and, with enhanced battery life, improved camera focus, and a swathe of hardware improvements across the board, this could be a real iPhone killer.