Dematerialisation and the future of work 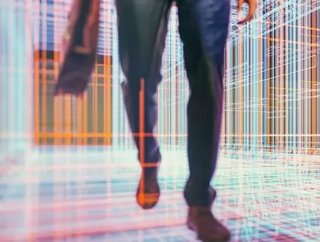 Anders Erlandsson from Ericsson talks dematerialisation and connectivity as a perk, a necessity and a basic worker’s right...

The COVID-19 pandemic has made it abundantly clear that the ways in which we work, socialise and connect will never be the same. The past year saw a global-scale, involuntary experiment with remote work, the likes of which had never been contemplated before. The exact ramifications this year will have for the future of the enterprise have yet to be fully understood.

Simultaneously, enterprises are grappling with increased need for sustainable practice throughout their operations and, at a time when the demand for digital connectivity has never been higher, reconciling these seemingly disparate goals presents a unique and timely challenge.

“Over the last couple of years, we've seen an increase in the realisation that sustainability is going to be increasingly important,” says Anders Erlandsson, Head of Ericsson’s IndustryLab. “Of course, whether we see that understanding and realisation translate into real action, well, that's where we'll have to wait and see.”

Ensuring that modern enterprises find ways in order to increasingly digitalise their operations, while driving increased commitments to sustainable practice is essential and, according to Erlandsson (backed up by an extensive report released by Ericsson), the two goals are more aligned than they might initially appear.

The Future of Work

“I think the most important question is: ‘will people even go to the office at all going forward?’” asks Erlandsson. According to new data gathered by Ericsson, the answer is probably “no”. The report, which was released back in March, points to a rapidly accelerating trend of “dematerialisation” taking hold across the modern enterprise. It all sounds very Star Trek, I know, but Erlandsson explains that the reality is not only very simple, but the process is already underway.

In short, dematerialisation means that enterprises are adjusting their physical assets and infrastructures to better reflect a world in which almost 60% of (white collar) work will be done remotely by 2030 and, according to 40% of decision-makers surveyed, the centralised physical office will no longer exist. 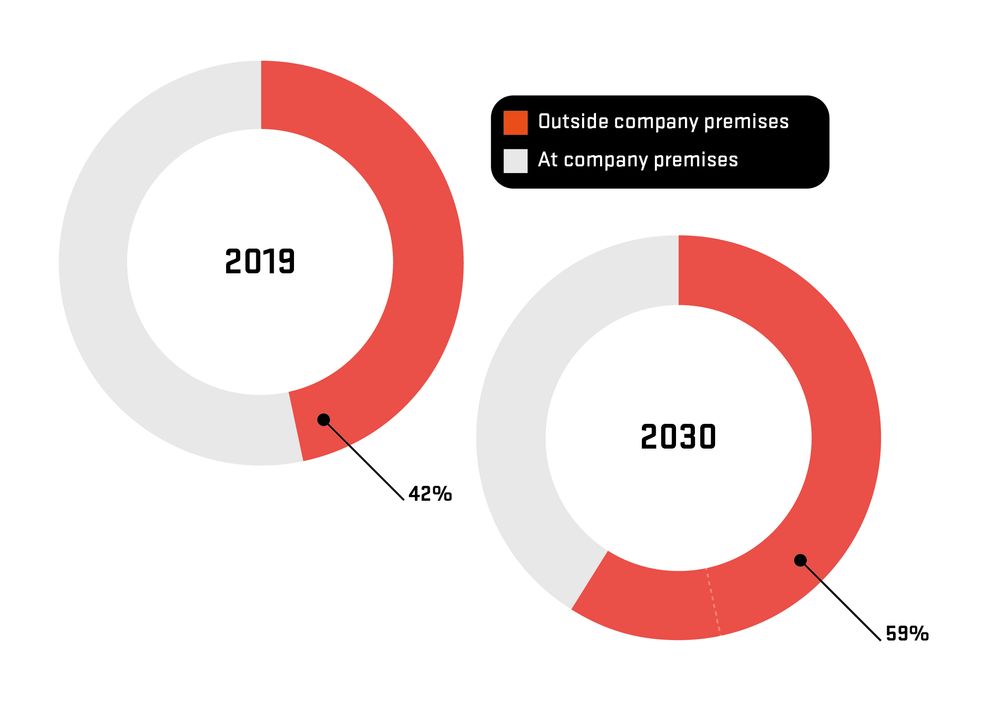 Based on research conducted by Ericsson.

“I think what we've learned during the COVID-19 crisis, particularly in some markets where there has been a very strongly established culture of employers being against working from home, that it is very much feasible to work from outside the office,” Erlandsson adds. “Companies have shifted their attitudes towards working from home, and are really looking ahead to a situation where a significant portion of the workforce is not going into the office on a daily basis.”

By removing the majority (or even all) of the demand for enterprises to have a physical presence, digitalisation - along with the increasing shift towards using renewable energy and several other factors - becomes a powerful tool for reducing a business’ carbon impact. “Due to the shift to the public cloud, we're not seeing a linear increase in power consumption tied to IT services. Enterprises are getting more out of every kilowatt hour due to the economies of scale that are created by the public cloud,” Erlandsson explains, adding that, “the movement of things like devices to home use will not have much more than a marginal effect on power consumption. Things like the need to heat offices - which is one of the major energy consumption factors for a modern enterprise - for example, will be dramatically reduced by the dematerialisation process, as more and more people work remotely.”

The global shift to remote work that Ericsson predicts will be a big contributor to dematerialisation, says Erlandsson, insofar that enterprises will, at a fundamental level, need less office space going forward - which also reduces the need for everything from heating, cooling and ICT infrastructure, to espresso machines and new ping pong paddles for the break room.

“As we've seen over the past year, technology really is enabling a significant shift towards a dematerialised workplace. However, connectivity is a must.” - Anders Erlandsson, Ericsson 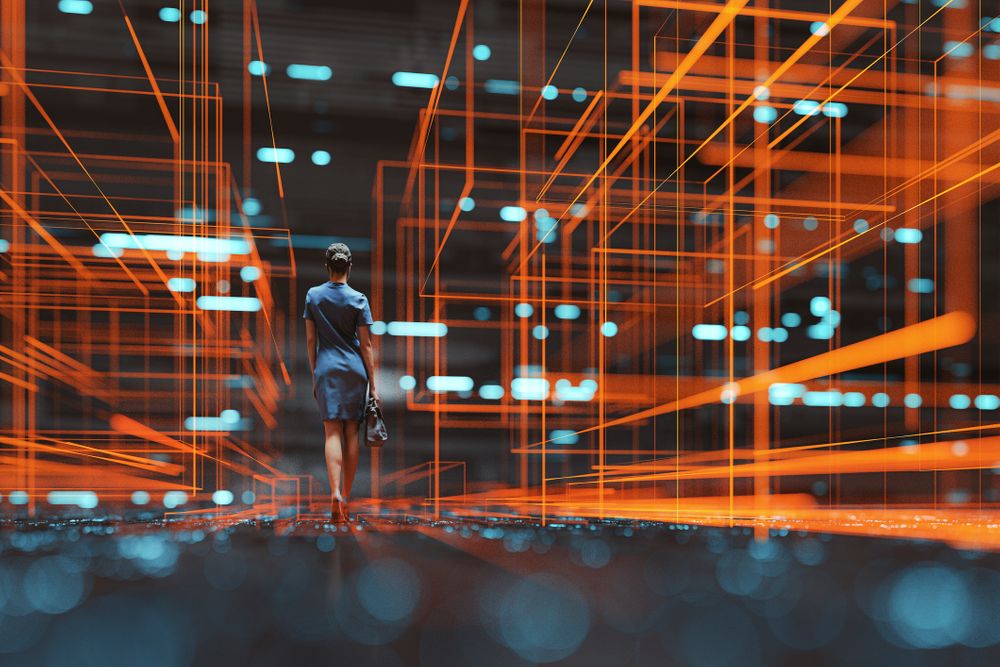 The past 12 months have already been an effective demonstration of just how essential connectivity - and the mobile network operators (MNOs) that provide it - have become to a world where hundreds of millions of people need the internet to work, not from their offices, but from their spare bedrooms, home offices and (in the case of our editorial director) the shed at the bottom of their garden.

If the dematerialisation of the modern enterprise continues, then the demands placed upon enterprises, MNOs and individuals are also about to undergo a fundamental shift.

Erlandsson, talking to me via Microsoft Teams, explains that, “Right now, I'm talking to you on behalf of Ericsson using a private fibre connection that I pay for myself...."

For Erlandsson, a high-speed fibre connection is something he wanted, had available to him, and paid to have long before the COVID-19 pandemic. However, he notes, a near-universal shift towards remote working highlights not only the increased need for high-speed internet in places where it wasn’t a necessity before, but also the increasing digital divide between those who have access to these services and those who do not. “Making sure employees have a space in which they can work from home is one of the most important things that needs to be addressed as this work from home revolution happens, because doing your job from your kitchen table on a slow or unstable internet connection isn't a long-term solution,” he adds. “We're going to see a lot more working from home in the future, but it would be sad if this too became an issue of class or income.”

The pandemic - among other things - threw into stark relief issues of internet inequality between urban and affluent areas and rural or otherwise marginalised communities. Malcolm Johnson, Deputy Secretary General of the ITU - the United Nations’ agency responsible for all its dealings with the telecommunications sector - explained to us back in January that during the pandemic, “Overall, telecommunication networks exhibited consistent resilience … despite huge increases in traffic … Ultra-broadband technologies such as fibre to-the-home were better able to respond to spikes in broadband traffic. So, countries with large deployments of ultra-broadband have exhibited less slowdown in latency and download speed.” However, he continued, “it became clear that the digital divide is a critical barrier for many. Populations unserved or partially served by broadband have suffered disproportionately throughout the pandemic.”

A future in which working from home makes the leap from exception to the norm has the worrying potential to exacerbate this state of affairs.

The “Right” Thing to do

Solving these issues of digital inequality is a foundational step that needs to be taken if a dematerialised workplace - with all the sustainability and cost-saving benefits to companies that it entails - is to be made a reality.

On the service provider side, MNOs need to work harder to deliver connectivity that is not only fast and affordable, but ubiquitously available from anywhere someone might need to work remotely. In the UK, MNOs have been making concerted efforts to broaden their network coverage and reduce “not-spots”. In February, EE announced plans to increase its 4G coverage across more than 500 areas throughout the country by the end of 2021, and 5G programs like the government’s SONIC initiative (who we’re speaking to later in this issue) are doing a lot to drive the kind of coverage that a dematerialised economy requires.

This is only half the battle, however, as Erlandsson notes that, in order to draw in enterprises to help solve this problem, service providers need to start offering the right kind of product. “Service providers and MNOs could develop offerings to solve connectivity problems with products like in-home base stations, 5G fixed access wireless, and so on,, but this is where the enterprises need to come in, because it's not the sort of service that the employee would ever buy,” he explains. “So, this is something that the enterprises should make sure their employees get access to.”

He likens it to the fact that many companies make it a priority to make sure they secure parking spaces for their employees, even going so far as to build their own car parks to meet demand. “If people couldn't drive their cars to the office, they couldn't work for the company. More recently, with more and more people driving electric cars, more and more companies are installing charging stations to let their employees charge those vehicles. Companies realised that, if they want to attract the employees they need to be successful, they need to do things like that to support the relationship,” Erlandsson continues. “I think we'll see the same realisation regarding connectivity in the future. It'll be a matter of competition between leading enterprises, which will light a fire under the rest of the industry.”

So far, however, he notes that the demand from the enterprise side, and the subsequent supply from the service provider side, just haven’t materialised. “We've looked at a lot of markets and seen very few operators offering this kind of service. There are several in the fixed wireless access business, but these offerings are almost universally targeted towards the end-user, not the enterprise,” he adds. 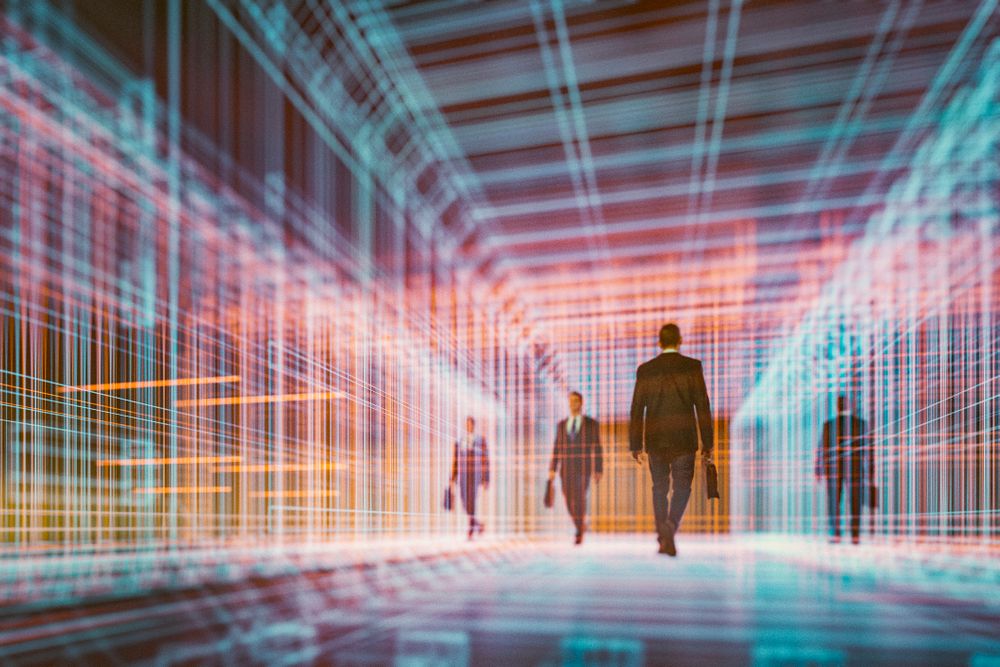 T-Mobile. A Blueprint for Dematerialisation?

Within three minutes of my call with Anders being over, I opened my RSS feed to find that US MNO T-Mobile had launched the exact thing we’d been talking about, more or less at the exact time we were talking about it.

In early March, the company made a big - slightly combative - announcement about a new revenue stream it intended to pursue: three new products aimed at enterprises looking to support their remote workforces: T-Mobile Enterprise Unlimited, a wireless plans with unlimited 5G on T-Mobile’s network for the same price as its competitors’ shared, pooled rate plans; T-Mobile Home Office Internet, a home broadband package designed to give remote employees the bandwidth and security needed to work remotely; and T-Mobile Collaborate, a suite of mobile-first, cloud-based tools for business calling, messaging and conferencing from virtually any device, anywhere.

“The pandemic pushed the fast forward button on the future of work, giving us a decade’s worth of progress in a year’s time. And it’s clear that work will never be the same,” commented T-Mobile CEO, Mike Sievert. “Tomorrow’s workplace won’t be anything like the old work from office world, and it won’t be like today’s work from home world. It’ll be something new: the work from anywhere (WFX) world.

If T-Mobile can lead the charge, - lighting, as Erlandsson put it, a fire beneath the butts of the competition - then it might provide the necessary pull that enterprises need in order to start thinking about the subsidisation of their employees’ connectivity as being just as necessary as heating their offices in the wintertime, or validating parking tickets. Erlandsson reflects in closing that, “Nothing is straightforward, and nothing is easy, but this is the direction of where we're headed. It's always easy, when you look at it from the company's point of view to ask how to save a buck here and a buck there. But it's important to look at the ramifications and make an effort to understand the effect that these sort of changes can have on employees' quality of life and society as a whole.”