View Full Report
Be fast, be first, is the aim of NuRAN Wireless as they pave the way to connect the unconnected across Africa with a $500m project with Orange

Tracking big cat poachers in Africa is a result of “bridging the digital divide” in rural communities by telecommunication company NuRAN Wireless. Francis Létourneau, President and CEO, is leading the company to connect rural communities from Ghana to the Democratic Republic of the Congo (DRC) - with the motto, “Be first, be fast” and has now signed a CA$500m project with Orange.

NuRAN Wireless provides carrier-grade low CAPEX and low OPEX mobile broadband infrastructure solutions for remote areas from the Arctic regions of Canada to the heat of the African bush. Létourneau highlighted how NuRAN is now focusing on being a network-as-a-service (NAAS) from originally being an equipment manufacturer.

With its affordable and innovative solutions of 2G, 3G, and 4G technologies, NuRAN Wireless offers a new possibility for more than one billion people to be able to communicate effectively over long distances. The company’s innovative radio access network (RAN), core network, and backhaul products dramatically drop the total cost of ownership.

Despite only being CEO for one year, Létourneau is forging ahead and revealed plans for the CA$500mn deal with Orange to work on 2,000 sites in DRC which he predicts will be ready in 40 months. “There's a lot of eyes on us to succeed so we have created a strong ecosystem of partners,” said Létourneau, speaking from the head office in Quebec, Canada.

“This is a massive market opportunity. When we were negotiating the contract with Orange, the first plan was 500 sites in five years, but we wanted to see more market penetration, so we increased the number and time frame.”

NuRAN Wireless cites four areas in which they have a competitive edge:

Létourneau spoke about stepping up to lead the company at the height of the pandemic and at time when NuRAN was restructuring itself following a file for bankruptcy from its wholly-owned subsidiary and operating company Nutaq Innovation Inc.

Within 12 months, Letourneau’s strategy of “be first, be fast” is now seeing multi-million projects in Africa and SE Asia and the company has a revenue of CA$4mn. “Our new vision is to shift the business model from being an equipment manufacturer to a NAAS and to invest in infrastructure,” said Létourneau who was the only executive left standing following the challenges last year.

He pointed out that it is testament to the company’s resilience, values and its passionate team that NuRAN Wireless can continue to pursue its inspiring goal. “Our team rose to the challenge of the pandemic and I think we are more effective as remotely working allows everything to be fast and you’re always up to speed. The challenge for me was to rebuild the team with the new vision in mind of being a NAAS with projects starting in Africa.”

Connections from the savannah to ships

The future focus for NuRAN Wireless is now DRC, but as Létourneau points out their reach historically extends to some of the world’s most remote locations from the African savannah to ships and offshore platforms.

“No matter how far our customers are from the main cities or how low the population of their village is, we enable them to communicate with the rest of the world. We empower them to overcome the social and economic challenges that have to be addressed in order for a community to progress,” said Létourneau.

He pointed out that NuRAN’s 2G low cost, low power solution which had a small bandwidth allowed the lowest cost of ownership. “We are now moving into the next generation which is LiteCell xg which will support 2G, 3G, and 4G. This will be rolled out in early autumn and will benefit rural connectivity. It can also support 5G, and although the rural market is not ready for this yet, we want to be ready for when it is available. The big trend in Africa is currently having a mobile as this enables people to start doing business from within their own communities.”

Bridging the digital with NAAS is all about connecting the unconnected, according to  Létourneau who is looking forward to visiting the new French-speaking sites in Cameroon and DRC once restrictions are lifted.

The challenges of connecting the vast central Africa country of DRC are huge. It has a population of 105mn and is the second largest in Africa and the 11th-largest in the world.

“Companies have tried in the past and failed. Only one has survived, which is one of our customers, Africa Mobile Network. We admire the work of Michael Darcy. We will continue to support them, but at the end of the day, we are focused on changing people's lives.

“Today, telcom is a basic need along with food and somewhere to sleep. We need to bring that service. These people deserve to be connected through our new NAAS. As we invest in this service we'll bridge this digital gap that is left behind by no investment in those areas. In light of the pandemic I believe it is more important than ever that people are connected to loved ones and can access healthcare.”

Commenting on the NuRAN Wireless strategy, Létourneau  said they now have the technology that allows them to connect with multiple operators.

“Our vision is to have multiple tenants connected to our network. We will assign with other tier one mobile network operators, or even tier two, but we would like to have a rent sharing infrastructure. This is part of our roadmap and plan for the upcoming years, the goal is to have 10,000 sites built over the next five years.”

NuRAN’s most recent project was in the vast country of Ghana in west Africa which Létourneau said was a steep learning curve, but they succeeded with the help of local experts who navigated the challenges of the geography, weather and language barriers.

Ghana spans the Gulf of Guinea and the Atlantic Ocean to the south. It covers an area of 238,535 km-squared , spanning a diverse geography and ecology that ranges from coastal savannahs to tropical rainforests. With more than 31mn people, Ghana is the second-most populous country in West Africa, after Nigeria. The capital and largest city is Accra; other major cities include Kumasi, Tamale, and Sekondi-Takoradi.

“The learning experience has been tough, especially during the pandemic. It's not like working in a large urban area where you have streets. Sometimes in Africa you need to drive six hours just to get 20 kms, navigating floods and cutting down trees to where you want to go. You also need to manage your site properly to make sure the people get the coverage they deserve.”

“We rely on partners to make it work as hiring hundreds of employees is not impossible - it is central to our strategy moving forward,” said Létourneau.

NuRAN Wireless currently work with the following partners such as:

“In Cameroon, Eutelsat is the first to be under contract with us for satellite space. They came in with a full managed service in the satellite. They will also be potentially partnering with us for Asia Pacific and in Latin America. On the ground we will be working with Sagemcom, which is an engineering service company.”

As we are moving towards DRC, Spacecom and NuRAN just entered into a game changing partnership. Spacecom invested in NuRAN Wireless with the firm intention to help accelerating the deployment and the success of this initiative.

NuRAN Wireless currently has a revenue of $4m CAD and Létourneau is confident the acceleration of projects in African will leverage profits in the near future. “We aim to do the same this year. The initial shift from being an equipment company to a NAAS company, we have seen a brief slowing down on the revenue side, but that revenue will come back and we will start seeing this revenue popping into our bank account in the coming weeks when we see the first site go live in Africa.”

How NuRAN Wireless connected the people of Ghana

People living in northern Ghana were previously uncovered by any mobile network. In rural areas such as this one, it is not economical to use traditional towers found in cities, leaving rural populations unconnected and unable to make use of the life-enhancing benefits that mobile coverage can provide.

In 2020, the Connected Society Innovation Fund awarded this technology vendor with a £330,000 grant to test and evaluate their new, innovative mobile connectivity solution for unconnected rural communities in Ghana. The grant is funded by the UK Foreign, Commonwealth, and Development Office (FCDO).

In partnership with Vodafone Ghana, and with support from The Ghana Investment Fund for Electronic Communications (GIFEC), NuRAN Wireless has now successfully deployed all seven mobile network sites in northern Ghana.

Through innovative backhaul solutions and Open RAN, these sites provide life-enhancing connectivity to several rural communities that were previously uncovered.

“We pride ourselves in developing not only accessible and affordable innovative technology, but also in pioneering solutions that earn MNO’s trust, considerably speeding up the rural connecting process. Our association with the GSMA and Vodafone has been an incredible learning experience and will in fact exceed expectations towards Bridging the digital divide.”

What technology do you predict will disrupt the industry in the next two years?

“I am a tech-lover, and predict we will not see a massive change as when the internet arrived. But I am looking forward to seeing IoT, which is going to be a massive disruption with all the mobile apps, the growth of the satellite industry and 5G which will bring a 1000 fold capacity of the network.”

When we think of rural connections you think of remote countries - but what other more unusual places have you been involved in connecting?

“On top of connecting people, the technology we've developed is also used to catch poachers in Africa and to find people in an avalanche by running and driving a drone using the GSM or 2G beacon. It's also being used in the rainforest to catch people that are cutting trees. So the bottom line is that that technology is extremely useful and it's been extremely rewarding to see the technology we've developed over the last couple of years being used so effectively.”

How important is sustainability to NuRAN Wireless?

What plans do you have for the future?

“We are planning to move into eight new counties and we are currently pursuing the licences to ensure we are ready with our mobile network operating partners.”

LIFE OUTSIDE THE OFFICE

What are you most looking forward to doing when the pandemic is over?

Our customers in Africa, particularly the French-speaking countries - but Quebec is my favorite city.

Most exciting telco technology trend at the moment?

At the end of the day, everything will be connected.

I am a big movie fan and love the Avenger series, Marvel and Lord of the Rings

Steak and a good cabernet sauvignon

What advice would you give a young Francis Létourneau as he is starting out on business?

keep on fighting for what you believe. 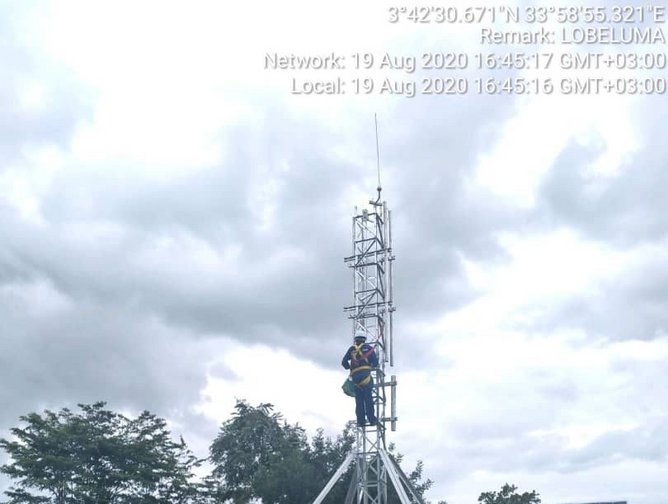