OpenRAN: the future of 5G 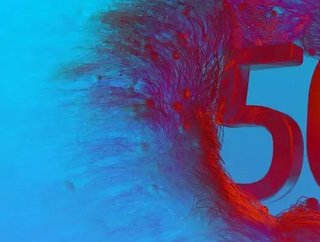 In order to increase competition, interoperability and innovation, the UK government is throwing its weight behind OpenRAN adoption in 2021...

In the wake of Brexit and during what are hopefully the waning months of the COVID-19 crisis, the importance of 5G adoption in the UK cannot be understated. According to data published by research firm Analysis Mason, 5G has the potential to add around £15bn of economic growth to the UK economy, if the country can “seize the full potential of 5G networks and implement advanced industrial use cases, over and above the substantial benefits expected from enhanced mobile broadband.”

The importance of taking full advantage of everything 5G can provide isn’t lost on UK enterprises, or the current government. However, the UK - like many other countries pushing forward with their 5G strategies - has found itself faced with a problem.

5G networks, like other generations before them, are largely sold to network operators by a single company offering an end-to-end, proprietary solution. Everything, from the radio antennas and base stations to the software that sits behind the network’s physical infrastructure, is designed to function as a cohesive whole. And, as anyone who’s ever owned a macbook can attest, while closed and complete systems tend to run smoother than more open-sourced alternatives, they rarely play well with third party integrations and hardware.

The upshot of this is that, by and large, the world’s telecom operators have a very limited series of choices when it comes to swapping out and modifying different elements of their 5G networks.

This wouldn’t be much of an issue if there were a lot of options to choose from. Sadly, however, this is not the case.

Currently, most mobile operators looking to build a 5G network have a grand total of three choices when it comes to where to buy the infrastructure to underpin that network: Nokia, Ericsson or Huawei.

In the UK (not to mention the US and a growing cohort of other nations) that grew even shorter in the past few years, with the Chinese technology giant incurring a blanket ban on selling 5G infrastructure to UK mobile network operators (MNOs). The UK Government is so committed to ejecting Huawei from the UK’s telecom industry that, back in November of last year, it passed a new law (aimed at increasing the UK’s telecom network security standards and “removing the threat of high risk vendors”) under which companies in breach of the new regulations can face fines of up to 10% of their annual turnover, or - if found to be in direct violation - as much as £100,000 a day for working with a “high-risk vendor.”

The fallout for the UK’s MNOs: a very small pool of existing options got even smaller.

In a market overwhelmingly controlled by two leading vendors, network infrastructure has largely been designed to be sold as a proprietary, top-to-bottom solution.

The issue this causes is that these networks lack interoperability with any third party software or hardware, suppressing competition and making it hard for smaller, more agile suppliers (who might make a single component of a 5G network very, very well, but don’t have the scale to make a whole network) to gain a foothold.

OpenRAN to the Rescue

Meet OpenRAN, a methodology that’s starting to gain some serious traction in several markets, including the UK. In short, OpenRAN is a way of building a network that emphasises standardisation and therefore interoperability between components sold by a range of third party suppliers. This means that carriers can send requests for proposals (RFPs) to multiple vendors, potentially choosing multiple suppliers to work across a single major project, something which is increasingly popular due to the increased agility and resilience that accompany a diversified supply chain and partner ecosystem.

On the supplier side, advocates for OpenRAN adoption believe that the approach will lower barriers to entry, foster collaboration and innovation, and ultimately accelerate the UK’s journey to fully embracing the potential of 5G.

“OpenRAN has the potential to fast forward innovation in the 5G network, accelerating the rate of production of new architectures and solutions,” says Joe Butler, chief technology officer at Digital Catapult, the UK Government’s agency that advocates and organises on behalf of faster adoption in the technology space. He’s also one of the leading figures in the SONIC project, a collaboration between Digital Catapult and the UK’s mobile industry watchdog Ofcom. Announced a few months ago, SONIC is shaping up to be one of the driving forces behind OpenRAN adoption in the UK.

Adrian O’Connor, CEO of Irish telecom equipment manufacturer Benetel, agrees about the potential impact that OpenRAN could have on 5G in the UK. “In four to five years, we’d expect significant proliferation of 5G to have occurred across the UK, with a mix of public and private networks having been rolled out. In this 5G scenario, we would expect OpenRAN technologies to play a significant role,” he explains. “A key factor in the OpenRAN success is the government’s 5G Supply Chain Diversification Strategy, alongside specific initiatives such as SONIC, which all target to ensure a competitive and vibrant supply chain for the UK 5G ecosystem.”

The messaging that surrounds the OpenRAN discussion sometimes runs into a degree of confusion and self-contradiction. Former BT CEO and OpenRAN advocate, Ian Livingston, gave a widely-publicised speech to UK politicians on the topic of OpenRAN adoption back in November of 2020, and seemed to frame OpenRAN adoption within the context of a more entertaining, Hunger Games-esque battle royale (or just a Battle Royale-esque battle royale if you prefer the original).

"The chances of creating another Nokia in the UK are close to zero, and I'm not sure it would be the right thing anyway," he reflected on the UK’s position “at the mercy of the Nordic duopoly.” OpenRAN, he suggests, would go a long way towards creating a larger, more even, and bloodier playing field. "Let the best man win as long as there are a lot of them," he added.

While the logic is understandable, some industry analysts - including Iain Morris, an editor at Light Reading - have painted the program as a step towards protectionism, something Morris notes “is clearly at odds with a pick-the-winners approach. Nor does protectionism typically result in lower costs and greater efficiency,” adding that, “Open RAN might conceivably support a larger number of equipment vendors than old-school technology. It would not allow every country to insist on homegrown technologies without inflating the service provider bill.”

SONIC and its participants, however, frame OpenRAN in a much more collaborative light. It’s also worth noting that the technology isn’t some plot to protect UK businesses, with a significant portion of SONIC’s participants (like Foxconn and Mavenir) hailing from outside the UK. If a shift towards OpenRAN is guilty of protectionism, it’s within the context of scale rather than any kind of nationalist segregation. 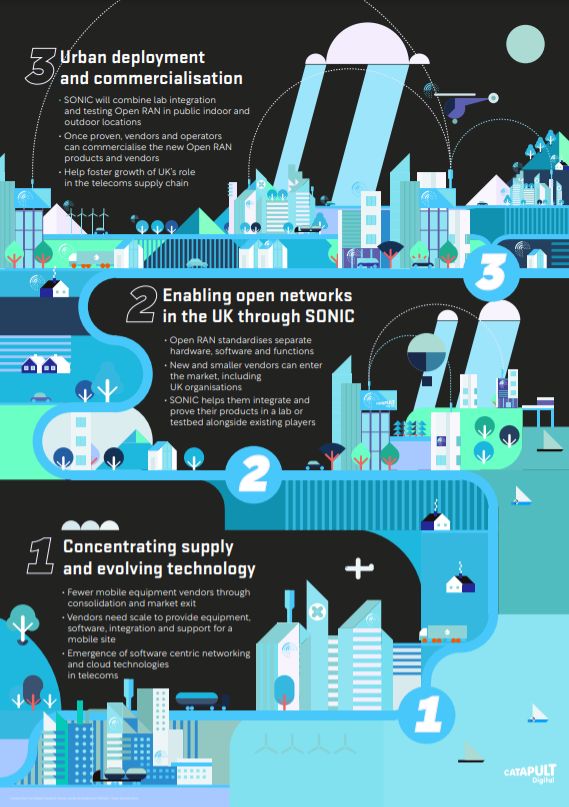 The UK Government, in the attempt to speed the UK’s 5G adoption and unlock some of that valuable economic growth, launched a new partnership in December of last year. Led by Digital Catapult and Ofcom, the SmartRAN Open Network Interoperability Centre (SONIC for short) has been tasked with exploring ways to increase one of the key factors needed for the success of widespread OpenRAN adoption: interoperability.

“SONIC is funded by the UK government as part of the 5G Diversification Strategy to help achieve a vision of a more open, competitive and diverse telecoms supply chain,” explains Butler, adding that the barriers to entry for new network technology firms in the UK are “very high, especially when required to build an entire end-to-end mobile access solution and operation.”

Now, SONIC hopes to find a solution to this problem, and then to the problems that this solution has the potential to create. “The development of open, disaggregated and software-centric networks such as OpenRAN has the potential to bring in many more products and vendors, increasing the rate of innovation, as they are now required to only provide a small part of the overall solution,” Butler continues.

“However, this vision leads to more complexity, and a greater requirement for integration and interoperability, and SONIC has been developed to address these challenges for vendors and operators of all sizes.”

As well as Digital Catapult and Ofcom, SONIC is assembling some of the world’s leading network technology companies with a vested interest in seeing OpenRAN succeed. In March, SONIC announced that it had brought eight OpenRAN leaders on board, including Benetel, Accelleran, Phluido, Effnet, Mavenir, Foxconn, NEC and Radisys.

“The initial goal here is to undertake lab-based testing on the OpenRAN solutions of different partners in relation to exactly how they interact with one another." - Adrian O’Connor, CEO, Benetel 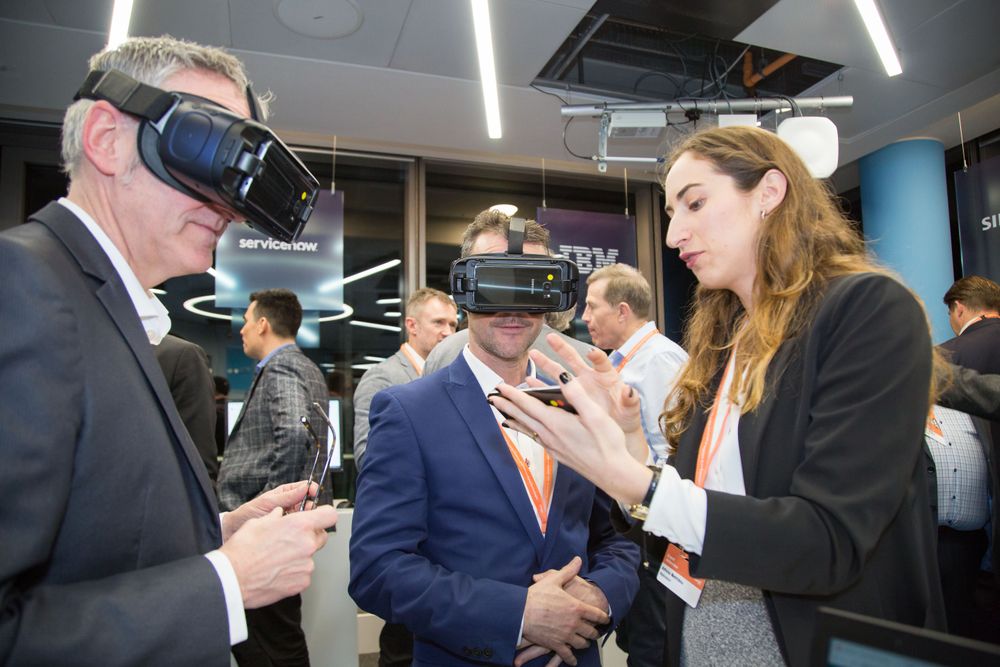 "The project will go live in late May 2021, with work focused on identifying and then ironing out any interoperability issues that might arise,” O’Connor explains. Benetel is contributing the OpenRAN radio units to the project, which will be tested for their potential to integrate with products supplied by the program’s other participants at SONIC’s lab in London. O’Connor adds that, even with all the participants’ goals squarely aligned, and the massive pool of talent they’ve assembled, the process isn’t likely to be an easy one. “

Though each vendor will have made their solution compatible with the latest OpenRAN specification, that doesn’t mean that every feature within the specification will have been included. SONIC is bringing together various ecosystem players who are all trying to interoperate on the basis of a standard that is going to keep on evolving over time,” he says.

More industry players are expected to join the project this month, further expanding the ecosystem of collaborators, as well as the number of offerings built to the same exacting standard. For participants in the program like Butler and O’Connor, OpenRAN represents a very bright spot in the future of the UK’s role as a potential 5G leader and economic beneficiary of the technology.

“The success of OpenRAN, and the various different items of hardware and software relating to this that have now been introduced, will rely on assurance of interoperability and solid integrations,” says O’Connor. “Access to a multi-vendor, end-to-end supply chain is going to be needed, and the work being done by SONIC will provide them with evidence that this supply chain is fit for purpose.”

Butler adds that a future in which the UK manages to fully harness the potential of OpenRAN is also one in which the UK harnesses the full potential of 5G, something that might “mean driverless cars becoming a reality sooner, augmented reality advertising rolling out more quickly, or even more prosaic things like filling in in-building notspots through operator and neutral host deployments.” He concludes that, “For the UK telecom sector, we hope it will mean new entrants - new solution providers, more network integrators and also more collaboration between suppliers.”